Birding in the Baltic

The central Baltic area has great birdwatching opportunities away from the crowds. In the area one finds eagles, owls, woodpeckers, northern ducks, migrating as well as nesting waders and the birds of the boreal forests.

The area is important for migrating birds, has great natural beauty and excellent birding opportunities in all seasons. On this page you will find information about where to go and which species to expect. The area includes Stockholm (Sweden), Gotland (Sweden), Kökar (Åland) and Kolka (Latvia).

Click on the picture below for a quick trip to the central Baltic area.

The Central Baltic Area is on the migration route for a large number of birds to and from their breeding grounds in the Arctic area. The area has many different biotopes, suitable for a rich and interesting fauna with many species that are rare in the rest of Europe. In spring ducks, geese, waders and passerines migrate through the area mainly from April to early June. In autumn the southbound migration follows mostly the same routes. The Arctic species pass, rest and feed along extensive undeveloped coastal areas - grasslands or bare small islands in the archipelago. During winter, Arctic waterfowl including large numbers of long-tailed ducks and rare ducks such as the Steller’s eider spend their time feeding in the area. Owls, woodpeckers and eagles can be seen all seasons and brighten birding during winter and early spring. In summertime the grazed meadows along the coasts, the rugged islands of the archipelago and the boreal forests offer peaceful wildlife experiences away from the crowd. The bird migration connects the countries around the central Baltic Sea with a shared responsibility for protecting the birds.

To make your visit easy and more rewarding professional guiding companies can offer tours in the area. Gotland Nature and Fågelguidning AB offer a range of tour packages to all project areas, the Stockholm Archipelago, Gotland, Åland/Kökar and Latvia. Six different tours with focus on birdwatching have been developed. Two exclusive, week long tours  covering the whole area. Other tours that include combination of visits in Stockholm–Åland and Latvia–Gotland–Stockholm. You can also choose an eco-friendly alternative. The tours are planned to take place during spring and summer to follow the massive bird migration  in the area.

The tour packages are presented in the folders below, just click for pdf.

The Baltic Birding Hotspots Map presents the prime birding sites in the area. On the back birds of special interest are presented in paintings and short text. Download pdf i low resolution. 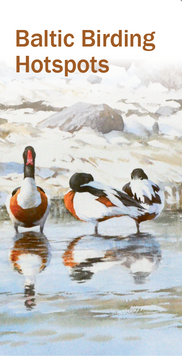 What birds can you expect to see? 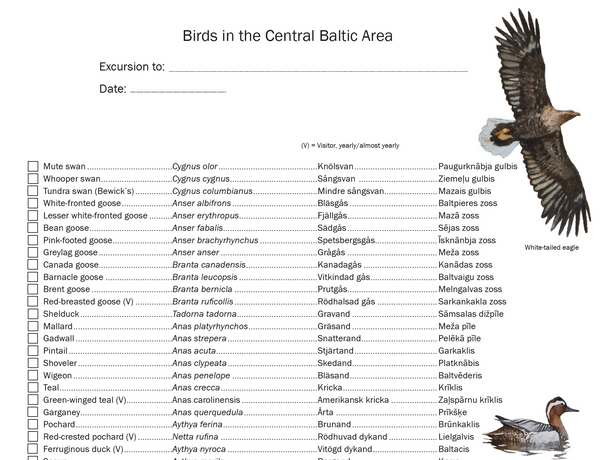 Read more about each area on the next page!